Manifold tokens, of wondrous bountiful grace, Glory unto Thee. Sparrowhawks, we, sing Thy praise! Thy servants rejoice in faith. W... 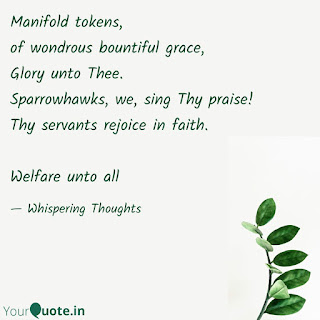 The xyris defied the grayscale background.
Bright bold yellow in the sameness of weather-beaten stones just on the other side of Sanjauli.
The cemetery had seen better days but now it lay in ruins. Forgotten. Disregarded. Displaced. Old. Some from the days of Britishers. Others New. Relatively new. Recent. Remnants of all kinds. Occasionally trespassed by the locals. Stealing a kiss. Holding hands. Sometimes remembered. But often the graves were left to themselves.
Expect for this one. Visited. Tended. Cared for. Remembered with a bunch of xyris. Daily, without a miss.
But this was not where Mrs. Alvarez was supposed to be. The xyris were supposed to be on her dinner table. Where she would be laying out the dinner for her family. Two little kids who would be fighting over study tables and playgames. And her husband who would be coming home after having put in a long day at the bank’s branch. That is where she was supposed to be.
And that is where she was headed. After having spent the weekend with some of her folks in Manali. The bus snaked through the lifeless humdrum of the afternoon. She was just behind the driver’s seat. Had two co-occupants next to her. Both ladies. Who had boarded from Mandi. Both snoring loudly. Well, who wasn’t?
Mrs. Alvarez. She loved the contours of the journey. She loved the winding and unwinding scenes before her. The loud and blaring local music over an old tape-recorder. The life. Untouched. Untasted. She didn’t feel like sleeping and missing out the lovely spread before her.
Thank God, she had the window seat to herself. She could look out over the greens and browns and weave stories in her mind. Stories that she would tell her children and lull them to sleep.
They were nearing the curves near Shalaghat. The hillsides here were embroidered with evergreen deodars arranged endlessly in neat rows and columns. The slopes strewn with brown twigs. Slippery. This was a stretch she loved.
A couple of blind curves here. Risky but not enough. Himachal had its share of more tricky routes than this. A cake-walk for a trained driver. But perhaps this one was an initiate. His maneuvers were not very smooth. And they had had near escapes at least on two occasions. But who was worried. More than half the bus was sleeping. The others in frivolous banter. And Mrs. Alvarez, lost in the beauty of hills.
The bus was tracing the curve, gently. But who had thought that they would run straight into a speeding truck. Thrown off guard, the driver lost control and balance both. The bus tumbled into the gorge.
Mrs. Alvarez never got a chance to say goodbye to her family. The body was mangled beyond recognition. The homeless from the woods took away all their possessions before the rescue could reach them. Without a phone or identity on her body, she lay in morgue for some two days. Her husband thought she had extended her stay with the relatives. And fresh rains in Manali had disrupted the telephone-network.
After two days, the police dutifully performed the last rites as per Hindu tradition and prayed for her soul to rest in peace.
A week later, broken and shattered Mr. Alvarez visited the spot where she had breathed her last. Then he had come home, or whatever remained of it, collected a couple of her things, and buried them in the Sanjauli cemetery.
The gravestone read,
“Xyris Alvarez
Forever