In the burning cauldrons,  through the humming saws,  across the poles -  wrapped in cotton and set aflame,  and in the swift strike of tyr... 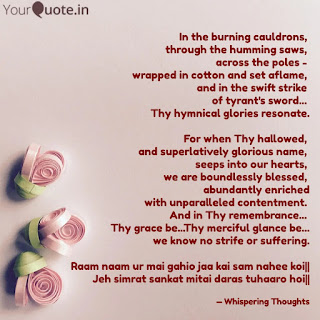 The sun was nearly gone. So were the last of his passengers. That was what he thought. Driving the cab at snail-pace through city’s traffic consumed him. Totally. But his wife and four little kids depended on his toil. And his life depended on them.
He drove his cab idly. Homebound, he was in no rush either. Just as he reached the sacred banks of Yamuna, he slowed down his car to say his prayers and take in the evening.
It is then that he noticed her. Kangana hair. And a mild jacket to suit the slight chill in the evening. She tried hailing an auto or two but they sped by. Not their fault. This was not a track where they expected to pick up passengers.
He brought his cab to a halt before her.
“Preet vihar?” the velvet voice asked.
Wow! That was on his way. He nodded (inside he was bursting with happiness at the prospect of making extra bucks. A lucky 170/- Perhaps he could take home some ice-cream for the kids. They had been nagging him for long now) as he turned on the meter and the FM. Old hindi songs provided the background score to his drive.
The twilight was now aglow with street lights and headlights. He carefully maneuvered the cab through shortcuts to avoid being stashed in a traffic jam at this hour. Then as they neared the destination, she guided him through the lanes, now nearly vacant. She directed him to stop near a seemingly upscale residential society. And then sat there toying with the zipper on her jacket. Clearly, she was in no rush to get off the cab.
“All your cash and all your money, now” the velvet voice commanded
“What!”
“All your cash and all your money, now” she spelled out the words slowly and singularly.
“Madam ji, your destination has arrived, 170 bucks please” stern but cautious.
In the silence, he heard the zipper moving.
“Now you don’t want me to go beyond this, do you” her eyes shot the question.
He got down, opened the door of the passenger seat and demanded his money again.
In the dead silence, he heard the zipper move again.
“You know they won’t believe a word you say when they see me in shreds and tatters”.
And for a minute he did imagine it. Her clothes rumpled and ruffled. Disheveled as she would be, her shouting for help would bring the people out of their posh apartments. Her every word would be believed. Taken to be true. Who would care for his version? A taxi driver ferrying a single lady across the town on lonely dark lanes. He imagined himself behind the bars. The media flocking to his home to cover the story. His family would be disgraced and his kids –
He shuddered. With fear. With panic.
“ Wh .. what… what do you want” he managed finally.
“ All your cash and all your money” the velvet voice unfazed
“ It is not much, really”. The zipper was undone.
“Please lemme go” he felt her shrugging off the jacket from her shoulders.
“Here you .. you can have it all, every single coin from my pocket” he counted out his day’s earnings. In her perfectly manicured hands.
Every single penny. The price of his sweat and blood. All in her groomed hands.
She got off the cab. The jacket thrown casually on her arm.
As she darted across the society gate, she looked back at him.
The wink in her eyes boiled his blood.


He started the cab. A man was rushing out of another gate, frantically hailing him but he sped past. Ignoring everything and everyone.